I finally saw New Moon last night. Chris and I went after I got home from work. I have to say, I was not horribly impressed with it

Don’t get me wrong; I enjoyed the movie. I also liked it better than Twilight. However, I was still a bit disappointed. At least part of my disappointment is based in my own wants and expectations of the film. I just feel like they could have done so much more with these films. The books were such a hit, but the movies (particularly Twilight) seem so low-budget. Honestly, I want Harry Potter level production values.

I think my biggest problem is I just don’t like Kristen Stewart. I think she is a terrible actress. I don’t like her constant brooding. I understand that Bella is whiney and brooding, especially in New Moon, but I think Kristen really is over the top about it. I’ve seen her in other movies (e.g. Adventureland) and didn’t care her for much in those roles either.

Somewhat related to my distaste for Kristen Stewart as an actress, there was something missing in the acting. I don’t know if it was Kristen, the chemistry between the actors in general, or the direction of the movie, but I just didn’t feel the emotion I felt when I read the book. When I read the book, I cried (and I am not a crier!) a lot. It was heartbreaking. It was like reliving every nasty high school break-up I ever went through. I could feel Bella’s pain like it were my own. I got very emo during that book; I didn’t get that in the movie. Her pain is the driving force behind the entire plot of that book. Without that pain being conveyed, her actions just seem ridiculous.

I can’t be completely negative though. The wolves were awesome! I think they did a great job with the CGI and effects in those scenes. It was so cool to watch Jacob phase in mid-air. And hello Taylor Lautner! I felt like such a dirty old lady every time he showed up on screen shirtless.

I was on a quest for more green tea and the Celestial Seasoning’s Sugar Cookie Sleigh Ride. I got my green tea, but I had no luck on the Sugar Cookie tea. I’m getting the feeling this is like the holy grail of teas!

I went to the Celestial Seasoning’s website and supposedly the Dominick’s near my house carriers the Sugar Cookie Sleigh Ride as well as the Gingerbread Spice which sounds equally as amazing. I think I might have to head over there after I get home tonight.

The bright side is Tazo teas were on sale! 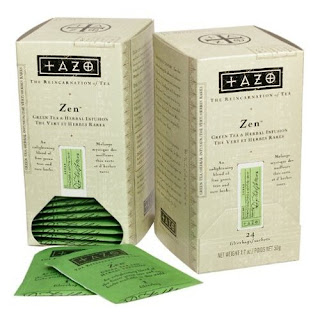 I picked up Zen which is a spearmint green tea. 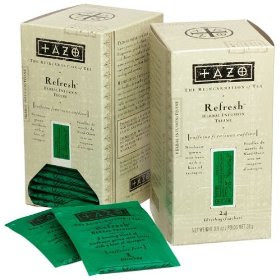 I also grabbed Refresh which is a peppemint and spearmint herbal.
I do love mint teas!

Chris and I also grabbed a couple pizzas to heat up for dinner since we didn’t eat before the movie and we were both starving by the time we got out! We bought the Whole Foods 365 brand pizza. 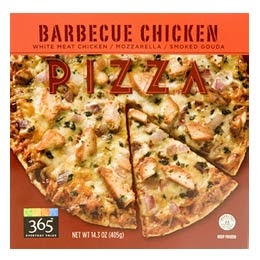 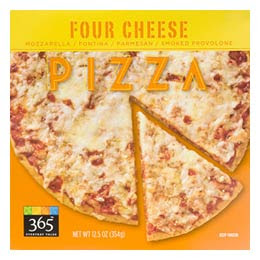 He got Four Cheese and I got BBQ Chicken. I have to admit I ended up eating the whole thing. Ooops! Both were yummy, but I definitely prefer the pizzas from Trader Joe’s.

Tonight I have a dinner after work with one of the agents we work with a great deal. We’re going to Tavern on Rush which I’ve heard great things about. I’ll be sure to report back on how it was. I’ve looked at the menu, and there’s already a few dishes I’m drooling over. I’m thinking seared tuna is definitely in my future.

Finally – make sure you head over to The Daily Balance and check out Shannon’s Musselman’s Gift Basket Give-Away because who doesn’t love free stuff!?