So, something that has really been getting on my nerves recently is when I sit down for a meal and someone asks me, “Is that all you’re going to eat?” Most often this seems to happen at work during lunch. Twice now it’s been the same co-worker who has asked me.

First of all, how does one even respond to that? I’ve been eating for a while now (over 25 years) and I’ve spent the last 10 months being as conscious as possible when it comes to what I am putting into my mouth and my body. I think I can figure out the appropriate amount of food to eat at any given meal. I don’t need you to question how much I’m eating. You don’t see me asking “Are you really going to eat that?!” as you’re stuffing your face with the sodium-laden, food-tragedy that is Ramen noodles.

Second, the meals that have been questioned are fairly substainal. The last time this happened I had 6oz of organic baby carrots, 1 oz of “everything” pretzel slims from Trader Joe’s, 3T. of Roasted Garlic Hummus (also from Trader Joe’s) and a medium sized apple. Seriously. That’s quite a bit of food. I walked away from the meal full. I guess maybe it doesn’t look like much, but have you ever eaten 6oz of baby carrots? It’s a lot of food.

Today’s lunch only illicited a look, but it was clearly a “That’s it” look. So what was my meager lunch today? I had a piece of Trader Joe’s BBQ Chicken Pizza (and by a piece, I mean 1/3 of the pizza) and a pretty large (an wicked yummy) pear. 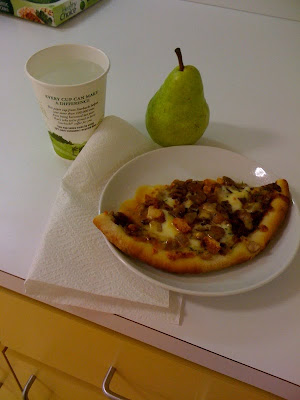 (In case you’re wondering, the TJ’s BBQ Chicken Pizza is hands down the best frozen BBQ chicken pizza I have ever had. It’s totally worth the 340 calories.)

As annoying as it is to have my lunches questioned, it’s really made me think about just how bad America’s portion distortion actually is. Then, as if I wasn’t already irritated enough by the questioning look my lunch got, after lunch my friend/ co-worker and I went to Freshii for some low-fat fro-yo. Unfortunately, they only offer one size – bigger than necessary. When I ordered, I asked for half the usual amount of yogurt and toppings. It was as if I was speaking a foreign language. This is basically how the interactiong went.

Okay then. Apparently, this was just such an out of the blue request that this girl couldn’t comprehend why someone wouldn’t want the value of a $4 giant cup of fro-yo. It wasn’t as though I was asking to pay less. I was still going to give them their $4.06 for half the amount of yogurt. I just didn’t want to waste food I knew I wasn’t going to eat. In the end, I ate half and threw the rest of it in the garbage. (I should have taken a picture. I’m still getting used to this blog idea.)

Does this ever happen to any of you – people questioning your portion size/ the amount of food you’re eating as not enough? How do you respond when this happens?

Part of my goal is to share awesome things I’ve come across in my journey. Operation Beautiful is certainly one of them.

I first saw the link for Operation Beautiful back in June on a Weekly Links blog over at The DailySpark. In July they did an interview with Caitlin who is the editor of Operation Beautiful. (She also runs the blog HealthyTippingPoint.) I always thought it was such an amazing, empowering idea, but I never actually participated…until today. This afternoon I posted my very first Operation Beautiful note. I hung it on the inside of the door in one of the bathroom stalls at work. I was planning to stick it on the mirror, but the cleaning lady was in there and I felt guilty putting a post-it on her freshly cleaned mirror.

I’d always meant to participate. I mean after all, how cool would it be to randomly come across a note like that – especially if you’re having a bad day. It was just one of those things that I always talked/ thought about doing but never actually did. It was Caitlin’s email with the link for the Pile on the Miles challenge that sprung me in to action. I read the email, and seeing the link at the bottom of her email made me think “Why not go do it right now?” and so I did it. I’m so happy I did.

I can totally see how addictive this will become. I already want to start leaving notes everywhere! I’ve got a ton of post-it notes (I bought an economy sized pack at Sam’s Club at some point I think.) so I think I’m going to buy some fun colored sharpies and start carrying them around with me so I can start leaving notes all over the place.